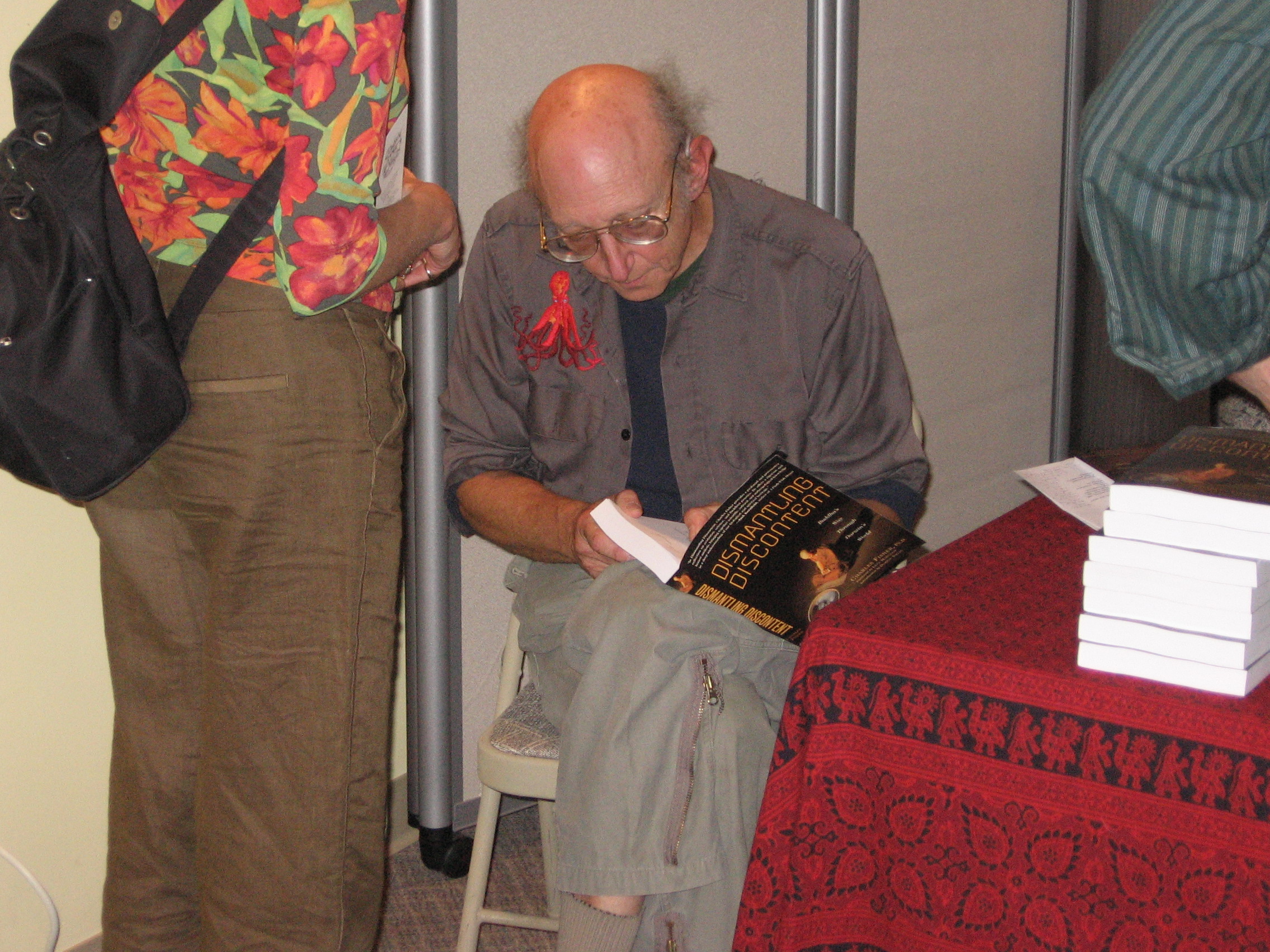 “Combining history and scholarship with his personal experience as a meditator and teacher, he brings Buddhist practice down from its sometimes rarified conceptual heights and places it firmly within an evolutionary setting.”
Dorion Sagan
Award winning science writer and coauthor of Into the Cool: Energy Flow, Thermodynamics and Life and Up From Dragons: The Evolution of Human Intelligence.

“If you want to understand the basic biological laws and conditions under which you live, just read Charles Fisher’s book Dismantling Discontent. A former sociology professor, a longtime practitioner of meditation and a natural explorer and raconteur, Fisher reveals how the story of biological evolution supports and amplifies the Buddha’s teaching, especially in regard to the heavenly messengers of old age, illness and death.   Drawing on observations from the natural world as well as research from modern neuroscience, Fisher shows how nature lays down difficult conditions while the Dharma teaches us how to make the best of the situation.  As he writes, “Darwin gives us the map, Buddha the compass to find our way home.”  Fisher weaves together personal anecdotes, scientific research and quotes from spiritual teachers, making the book accessible and pleasing to read. In the continuing cross-pollination of science and Dharma Fisher’s book is a significant contribution.”

“Evolutionary theory is science when science is having a really good day. Born out of the patience and curiosity of generations of naturalists, it is far more down-to-earth than any other major scientific theory, yet it is endlessly surprising and provocative. Its core ideas are simple enough for anyone to grasp with a little effort, yet their implications reach deep into our lives. Something similar may be said of meditation. It, too, begins with an acknowledgment of the earthiest, fleshiest, facts of life: the absolutely plain and inescapable reality of one’s own body and breath. It, too, confronts something exceedingly complex (the tangled mess of our minds) by means of a few simple principles and the discipline of adhering to them. It, too, makes possible a much clearer and more realistic understanding of the predicament of being alive and having to die.

The meditation teacher, nature lover, and former sociology professor Charles Fisher is clearly onto something valuable, then, when, in Dismantling Discontent: Buddha’s Way Through Darwin’s World, he takes it upon himself to map the territory where evolutionary theory and meditation––Darwin and Buddha––overlap and meet. His effort is a welcome departure from the bulk of writing about science and Buddhism, which tends to sail off into the lofty realms of electron clouds and brain synapses, quickly losing sight of the boring and very sad business of old age, sickness, and death. Fisher, by contrast, treats all the accumulated knowledge of the biological sciences as a resounding affirmation of the Buddha’s declaration that disappointment, pain, and apprehension of pain accompany all human activity like a shadow. Fisher is convinced that every shred of scientific evidence he picks up and passes on to his readers can and should be absorbed in a very personal manner, as a piece of a puzzle that will eventually make life more intelligible and bearable. His interest in Buddhism follows a similar pattern: he’s not in it for the philosophy and mind-boggling cosmologies, but for the butt-to-the-cushion, attention-on-your-breath discipline of meditation, which can alleviate the gory mess evolution has created for us.” (Click here for the full review)

5.0 out of 5 stars
Thank you, thank you,
By Barbara Brachtl (Redmond, WA United States)
(REAL NAME)  January 9, 2008
I am more grateful to Charles Fisher than I can say for writing this rich, open-minded book. I have been practicing Buddhist meditation for two years but still have questions like: What does it mean to be fully human? Is meditation “an unnatural act”? How does meditation change a person and, more specifically, a person’s brain? Fisher didn’t answer all my questions — in particular, on the subject of brain-change, he concludes that despite the Dalai Lama’s interest, there’s still very little sound scientific evidence — but he gave me a new framework for thinking about Buddhism and meditation plus a good deal of knowledge from science and his own experience meditating and engaging with the natural world. I am especially grateful to have learned about “antagonistic pleiotropy,” which occurs when a gene or genes express multiple traits — some advantageous, some not so. For example, the human speech apparatus, a boon to our species, has a downside: It’s easier for us to choke or drown. Fisher suggests that similarly the genes that created human consciousness, which enables us to better use the past to plan for the future, also set us up for uniquely human discontent, or suffering. And so we meditate….

5.0 out of 5 stars
Are You Ready For This Book?
By Rw Bussewitz “Buzz Bussewitz” (Boston, MA)
(REAL NAME) November 7, 2007
I was not well prepared for the forceful impact this book had on my thinking and long-held values and beliefs. Fortunately, I like having my ideas challenged; it’s good to be “corrected” when there’s a clear “payoff”: the payoff is no longer having to labor under false notions. (It’s mainly the ego which takes the hit.)

Some of the new insights for me involve better appreciation of what Darwin was about. Darwin’s “failure” was less about being wrong in theory, but more about failing to reconcile shortcomings and personal disappointments in his own life. (He was not very happy, period.) With all the prodigious work and attention focused on nature, it’s not surprising Darwin had no energy left for examining his inner nature. And that would be a lot to ask – but interestingly enough, this kind of “inner search” – scientific in its own right, was already accomplished centuries before thanks to the historical Buddha. Wisdom can also be a source of happiness, to put it in my words! Now, we might ask, why has it taken so long for anyone to see the parallel here? This is the author’s first stroke of brilliance.

As for the benefits to befall those who are familiar with the Buddha’s teachings and who already have a grasp of how to “reduce suffering” – by gaining a truer picture of how we as a species fit into nature and belong to it – these benefits I believe would be enormous. By realizing that even flat worms have feelings, as revealed by their liking to touch one another, one could expand the basis for the Buddha’s emphasis on “non-harming”. But this doesn’t even begin to describe the brilliance of the feat Fisher has accomplished by bringing together a synthesis of what seemed to many as disparate and unrelated endeavors. I found some sections of the book more engaging than others, but throughout the humor and irony of seeing how unevolved much of our thinking is – indeed how irrelevant much of our thinking is as well as counter-productive – well. it’s better to hear it “page by page”, having an open attitude, open heart as well.

The book has a lot of heart in it, Fisher has given himself over to this book, so that it is both personal and inspired by others’ research which the author presents. We may not be “ready” for this book, just as few were ready for Walden at the time it was published. Dismantling Discontent, like the former, is, essentially about awakening…to a deeper realization of who we are and where we might be heading both as species and on an individual level.

“Incredibly creative and thought provoking!  I love the way the author balanced Buddha and Darwin (very yin-yang).”
“This is obviously a very contemplative work….I believe it to be a remarkable work of thought processes and individual reflection and inflection. However the spiritual or religious ramifications are much less pronounced than the sheer intellectual qualities and astute observations of a gifted author.  Bravo!  I believe you have succeeded here where many authors fear to tread. …”

“Antagonistic Pleiotropy…I’ve been thinking about this rather forbidding term ever since I ran across it in a book called Buddha’s Way Through Darwin’s World, by Charles Fisher (2007).”